The Pilgrim nuclear power plant in Plymouth was officially shut down on May 31, 2019, and is in the process of decommissioning. Decommissioning is the process by which nuclear power plants are safely retired from service. The progression involves decontaminating the facility to reduce residual radioactivity, dismantling the structures, removing contaminated materials to appropriate disposal facilities and releasing the property for other uses. The owner remains accountable to the NRC until decommissioning has been completed and the agency has terminated its license. LWV of the Plymouth area has been active in ensuring that the public is aware of the risks associated with the decommissioning and advocating for safety of Plymouth’s citizens, land, and waters.

As of April, 2022, a million gallons of radioactive water (mostly in the fuel pool & the reactor building) remain to be disposed of.  This is most urgent issue facing Pilgrim now.
HOLTEC’s plan to dump this water into Cape Cod Bay was revealed in early December to Congressman Keating, who leaked it to the press.  When a minor uproar ensued, Holtec walked back its plan to start “over-boarding” during the first quarter of this year, instead promising not to dump this year “while evaluating options”. But in reality there are only two options: (1) dump it into the Bay, or  (2) ship it off to a licensed radwaste site in Idaho.  Option 2 is what Vermont Yankee chose to do. It is safer, costlier, and more logistically complicated. But it is the only safe option.  Holtec does not want to spend the money.  And the NRC allows such dumping.

What Can You Do?

Two pieces of emergency legislation address Holtec’s threat to overboard radioactive water are currently in the Joint Committee of the Judicary.

H.4444 [Cutler and LaNatra], “An Act relative to preventing the discharge of radioactive materials”, was heard in early February. Henrietta Cosentino, on behalf of our league, testified in its favor. Rosemary Shields testified on behalf of the Cape Cod League. The Public Comment period has been extended to April 14th.

S.2791 [Sen. Moran], is the Senate version of the same bill, also described as “An Act relative to preventing the discharge of radioactive materials).  It is essentially the same as H.4444, except that S.2791 proposes stiffer fines for dumping.

Both bills start with this statement:   “No person shall directly or indirectly deposit, dispose of, or discharge, any solid or liquid radioactive material directly or indirectly (i) in any coastal or inland waters as defined in section 1 of Chapter 131, (ii) within the rise and fall of the tide waters, or (iii) on any land owned by any other person….”
We urge you to support for both bills and request a hearing be held as soon as possible for the Senate version.  Email, call, or both to express strong support for these bills before April 15.

A Hearing for this bill is scheduled for Tuesday, April 12 starting at 3pm.  If you have strong feelings and the inclination to express them at the Hearing, you can sign up to give oral testimony!

The NRC (Nuclear Regulatory Commission) has announced a public meeting to be held MONDAY May 9th:

Other Pilgrim-Related Bills in Progress in the Legislature 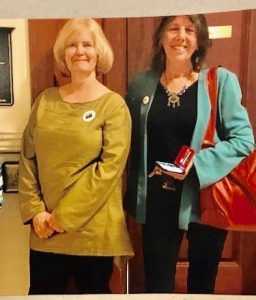 On June 22, 2021,Henrietta Cosentino of the Plymouth area league joined Rosemary Shields of the Cape Cod League to testify before the Massachusetts Legislature’s Joint Committee on Public Health in support of  bills that would address serious deficiencies in the current monitoring system.  We are hopeful that these bills will be voted affirmatively out of committee and move on to pass through the legislature.

Watch the video presentation, and read more below:

Why These Bills are Needed

By the end of the year, Pilgrim’s ISFSI (independent spent fuel storage installation) pad will contain 62 dry casks containing more than 30 times the Cesium-137 released at Chernobyl. Currently the NRC does not require individual casks to be monitored beyond daily visual inspections to ensure that passive heat removal system remains operable—that air inlet and outlet vents are not blocked. But the thin-walled casks and cement-clad overpacks degrade and crack over time, especially in our marine environment.  There is as yet no technology to fully inspect, repair or replace a defective casks. The casks are warrantied for 25 years only.  Their contents remain toxic for at least 250,000 years.  Given that welds and vents can and do fail, leaks are certain to happen sometime down the line.  The NRC’s thermoluminescent dosimeters (TLDs) do not measure in real time; their data typically gets transmitted either quarterly or annually. Holtec has not responded to a request for details of their locations, theoretically at the perimeters of the ISFSI pad.  To protect public health, we need rigorous real-time daily data reporting from individual casks.  For a more detailed argument, see written testimony here.

What You Can Do

Companion bills in the Massachusetts Senate (S.1507) and House (H.2254) are currently in committee. You can help move these bills into the legislature by emailing your support to any or all of the sponsoring legislators; and to the Chairs of the Joint Committee on Public Health:

You may also email your own representative or senator directly. Susan Moran is Plymouth’s senator. Kathy LaNatra and Matthew Muratore (<Mathew.Muratore@mahouse.gov>) are our reps.

Make your email as simple as possible—a line or two is sufficient.  Expressing strong support for S. 1507 and H. 2254 because they will increase the safety of the spent fuel stored at Pilgrim.